Adara is a Ponyz character that first appeared in the 2nd Edition of the Bratz Ponyz line.

Adara has white fur, pink hair and blue eyes, however in the 2008 game Bratz Ponyz 2 her colouring was changed to blue. This might be because another pink horse, Ambrosia is already in the game and they wanted the player to have more colour options.

Yasmin is seen playing and grooming Adara in the commercial for the second line of Ponyz toys, suggesting she may belong to Yasmin.

Adara is best friends with Carmelina, Ambrosia and Brynesse.

She is good friends with Celeste, Pursia and Sashay who she met in Bratz Ponyz 2.

As Bonita is also Yasmin's horse theirs a possibility Adara and Bonita are related. 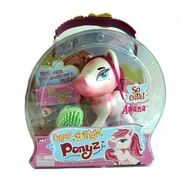 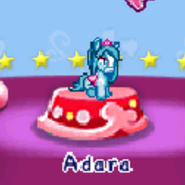