Avery is a character that appears in Bratz: The Movie. She is portrayed by Anneliese van der Pol.

Avery is Meredith's best friend. She is usually seen hanging around Meredith and Quinn. It is possible that Avery is not very fond of Quinn as she doesn't seem to care for her feelings, as seen when she says "Oh my god! Oh my god, I can't believe she's gonna let me go first!" as this could hurt Quinn's feelings.

Avery has strawberry blonde/ginger hair. She is not seen in any of the cartoon Bratz shows/movies. Her style is the same as Meredith's, casual yet trendy.

Avery is Meredith's best friend. She usually hangs round Meredith, Quinn and Cameron. It is unknown how the two girls met. Not much can be said about Avery & Meredith's relationship. When Meredith had finished singing Fabulous, she said "I'm going to invite my dear, dear friend to go next." Avery started fan-girling after this and said "Oh my god! Oh my god, I can't believe she's gonna let me go first!" and Quinn looked at her uncomfortably. Avery looked upset when Meredith said "Yassy, darling! Come on up here! Come on!" Avery performed with Meredith in the talent show as one of the "Meredettes".

Quinn is Meredith's second best friend. They usually hang out with each other, along with Avery and during school hours, Cameron too. It is shown that Avery doesn't like her very much when Avery fangirls saying, "Oh my god! Oh my god, I can't believe she's gonna let me go first!" because Quinn looks at her in an upset way. 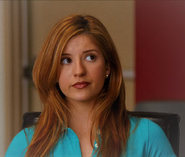