Bratz: Action Heroex is a IOS game based on the Bratz Action Heroez doll line. It was released for IOS by Entertaiment in 2013.

"Get ready for an exciting Adventure! You can explore 2 different experiences that will keep you entertained for hours. Adventure Play one (or more!) of 5 possible Action Heroez characters. The heroez must work hard to save their individual worlds from a new menacing threat! Virtual Experience Use the mat and figurine included in your doll purchase to watch your characters come to life in a 3D virtual world. Train your Action Heroez, change their clothing and engage in multiple figurine interactions . Any character you play will automatically let you change her clothing, play the adventure game and unlock her own secret world to expand the adventure game. FREE PREVIEW!! Get the AR experience in Action Heroez Party mode! Download the mats from our website, scan them into your device and enjoy engaging in an augmented reality for free!" 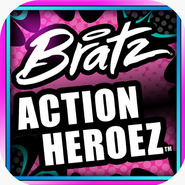