Bratz: Fashion Pixiez is a 2007 American computer-animated film based on the Bratz fashion doll line manufactured by MGA entertainment. Directed by Mucci Fassett and Sean McNamara and written by Bart Jennett, it is the sixth instalment in the Bratz film series. With Britt McKillip as Cloe, Brittney Wilson as Jade, Maryke Hendrikse as Yasmin, Ashleigh Ball as Sasha and Chantal Strand as Breeana it's the first film in the Bratz series to deviate from the original voice cast.

When Cloe, Jade, Sasha and Yasmin follow Breeana to find an explanation for Cymbeline's strange behaviour, they bring to light a secret more amazing than they ever imagined. Using magical glasses, they are introduced to the incredible world of Pixiez existing alongside regular, normal humans. The Bratz must enter the stylish and spellbinding nightlife of fairies, where unicorns and gnomes come to life, and the battle between good and evil is even more important than good fashion sense.

When Melvino asks his daughter Cymbeline what she wants for her 18th birthday, she reacts rudely. Breeana, Cymbeline’s younger sister, asks her for advice on how to get a guy in Cymbeline’s class to ask her to the upcoming Magnolia Ball. Cymbeline tells her not to bother her with petty drama. Breeana then loses a charm on her bracelet. That night, , Breeana catches her sister sneaking out. She follows her into a wooded area overlooking Stilesville. A red globe appears in the sky and Cymbeline vanishes.

The next day in class, Yasmin, Cloe, Dylan and Cymbeline attend Chemistry class. Lina, a transfer student, is introduced to the class. Dylan immediately takes a liking to her. After class, Dylan accidentally knocks into Breeana. She asks him if he's going to the Magnolia Ball but he is too distracted by Lina. Yasmin and Cloe berate Cymbeline about sleeping in class. Cymbeline quickly brushes the warnings off and leaves with Lina.They meet up with Jade and Sasha and Dylan's backpack is stolen by a crow. He chases the crow out of the school and into the woods, where he crashes his bike. Lina appears holding his backpack and lures Dylan deeper into the woods.

In the town square, Sasha, Jade, Yasmin and Cloe work on getting the place ready for the Magnolia Ball. Cymbeline's father, Melvino is funding the ball and Cymbeline is supposed to be organising it with them but has failed to show up. They decided to go to her home and ask her father about her recent behavior.

In the night, Breeana catches Cymbeline sneaking out again and threatens to tell their father what she's been doing. Cymbeline invites Breeana to come out with her and see where she's been going on all this time. Cloe, Jade, Sasha and Yasmin arrive at the Delvin house, but Cymbeline has Breeana cover for her and tell the girls she's not home. Knowing something is up, Yasmin and Cloe sneak inside while Sasha and Jade wait outside. Cloe trips on a lawn gnome as they walk up to the house. When no one answers the door, they check around the back where they find Melvino talking to a mysterious figure in the greenhouse. Breeana catches them and warns them to leave, but they follow a strange noise to find Cymbeline standing on the cliff. They watch with amazement as wings sprout from her back and she flies away. Yasmin and Cloe are attacked by a talking gnome and flee the grounds.

Dylan arrives at school in a bizarrely good mood, having been put under a spell by Lina. Meanwhile, Sasha and Jade don't believe Cloe and Yasmin when they tell them about Cymbeline and the gnome. They find Breeana themselves but she refuses to tell them what happens. Breeana tells the girls she has a date with Dylan and due to suspicion, they insist on coming with her. She takes them to the woods and they see Dylan singing. Cloe and Yasmin are suddenly surrounded by Lina, Cymbeline and a hoard of Dark Pixies and are captured.

The next day, Jade and Sasha go to the mall to work on the Magnolia Ball. They bump into Cloe and Yasmin, who are with Cymbeline and Lina. They act rudely to Jade and Sasha and dismiss their concerns about their change in personality. They tell Jade and Sasha that they are all ditching the Magnolia Ball to go to a costume party. After they leave, Sasha trips on the same lawn gnome from before. Jade and Sasha find Breeana crying in the town square under the old oak tree. They confront Breeana but she refuses to tell them what's going on, fearing she will lose her sister like she lost her mother. She tells Sasha and Jade that 10-years-ago their mother, Dee, was lost to a snowstorm. Breanna explains that Pixies are real, but live in hiding. She gives them special glasses that will allow them to see the magic. The girls are amazed and Breeana reveals Pixiez are supposed to stay hidden so they can help people and nature and that her father, Melvino, is the king of the Pixiez. She also explains that Pixiez are supposed to get their wings and powers on their 18th birthday if they are good, but Breeana doesn't know how her sister got hers early. Despite this, she knows it has something to do with her sneaking out at night. They decide to wait until it's dark to follow Cloe and Yasmin, who they know can’t fly.

That night, they follow a trail of pixie dust to a pixie lair inside an old tree in the woods. Breeana uses the magic wand her mother gave her, to give Sasha and Jade the ability to see Pixies and they go inside the tree. They step into a party, filled with thousands of Dark Pixies dancing. Sasha wants to join the dance, but Breeana warns her friends that joining will cause them to fall under the Dark Pixies’ spell. Lina steps on stage and makes a speech, saying she wants to finish what she started 10-years-ago Her plan is to get Breeana on her side and then Melvino will have no choice but to do what she wants. Breeana begins to feel dizzy, so Jade and Sasha attempt to help her out of the lair. The girls then see Cloe and Yasmin, who have been put under a spell by Lina, and try to use a counter spell on them. This doesn’t work however, and Cloe and Yasmin kidnap Breeana. Lina discovers Breeana is at her party and tries to convince her to join her side, bribing her with wings, but she refuses and bursts open a hanging nest of pixie dust using her wand. Jade, Sasha and Breeana attempt to escape, but Lina destroys the lair and the tree caves in on them.

At the Magnolia Ball, Melvino is about to give a speech when a swarm of Dark Pixiez fly over the town. Lina confronts Melvino, saying she escaped from her banishment. Just as Melvino attempts to fight her, Lina shows Melvino that she gave Cymbeline wings. Meanwhile Sasha, Jade and Breeana are saved by Alfie, a gnome and his friends. He tells them what happened and produces Breena's Unicorn, Dempsey for her to ride to the ball and one each for Jade and Sasha.

In the town square, Lina demands Melvino abdicate his throne so she can be queen, but he refuses. She tells him he will meet the same fate his wife did and reveals that 10-years-ago she caused a snowstorm to draw Dee away from her kids. Lina had been planning to murder Dee, but Dee fought back and their combined magic turned Dee into the tree that now sits in the town square. The event rinsed Lina of her powers, and she had been waiting 10 years until she fully regained her strength before attacking again. Melvino breaks the spell Lina put on Cymbeline, removing her enchanted wings and returning her to normal. He saves all the townspeople, including Cloe, Yasmin and Dylan, and attacks Lina. But freeing everyone from the spell weakened Melvino and Lina quickly overpowers him and turns him into a tree. Breeana arrives with Jade and Sasha. Cymbeline tells Breeana what she learned about their mother and they join hands to do a counter spell on the tree and free Dee from Lina's curse. Dee reunites with her daughters and saves her husband. Melvino turns Lina into a tree for her crimes. He thanks the Bratz for their help but tells them he must remove their pixie sight forever. He then erases the memories of everyone around them and the party continues. Dylan finally asks Breanna to dance with him. 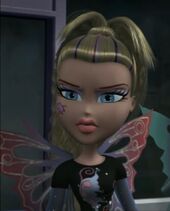 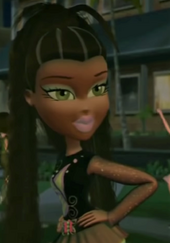 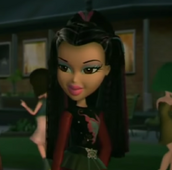 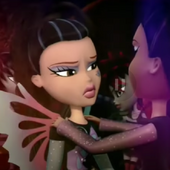 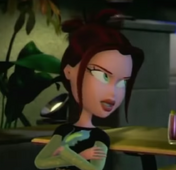 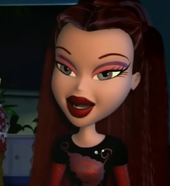 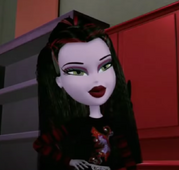 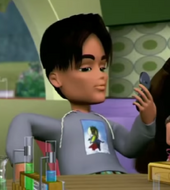 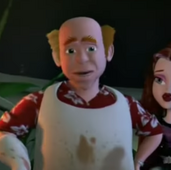 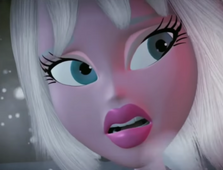 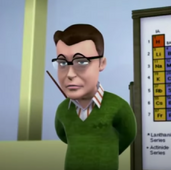 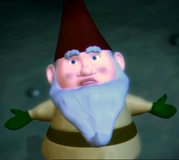 A line of Fashion Pixiez dolls was released in 2007. 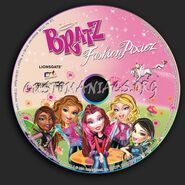 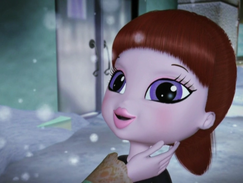 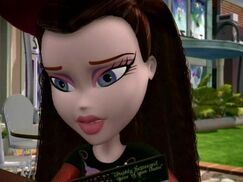 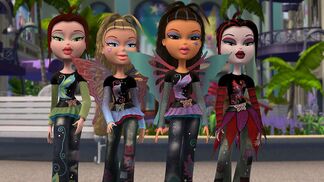 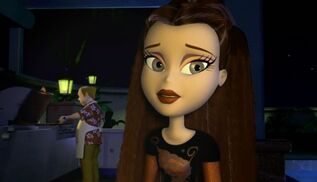 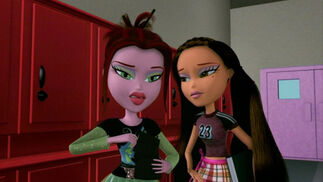 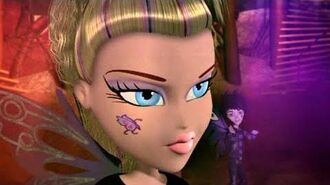 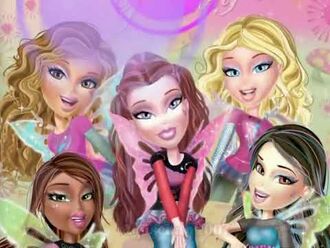