Bratz: Girlz Really Rock! is a 2008 American computer-animated film based on the Bratz fashion doll line manufactured by MGA entertainment. Directed by Mucci Fassett and written by Norah Lally, it is the 11th instalment in the Bratz film series. It stars Britt McKillip, Britt Irvin, Maryke Hendriske, Dorla Bell, Jessie DiCicco and Tara Strong reprising their roles from previous films, along with new additions such as Jennifer Hale, Charlie Schlatter and Adrian Holmes.

The film opens with the Bratz at a Red Carpet event. In a similar fashion to the Bratz: Rock Angelz film, a narrator (Sasha in this case) then begins to explain how the girls arrived in this situation.

The film then cuts to the Bratz' last day of school. The girls find out that they have all been accepted into an elite performing arts camp: Camp Starshine, intended only for the 'most talented young performers in the country'. Eitan and Dylan are also attending the camp.

At the end of the school day, the first musical number of the film begins. During this song, the Bratz reveal that they are excited to have an entire summer with no Tweevils (Who show up at the cafeteria), and that they are keen to 'rock Camp Starshine' with their slammin' band. Dylan reveals he wants to go to camp to meet 'hot actresses', and Eitan expresses his desire to direct films.

The Bratz, Eitan, and Dylan arrive at camp and attend an introductory session. Miss Higgins, the camp director, announces that at the end of Summer all campers are expected to compete and the End-of-Camp Finale Showcase, which will be judged by famed director David Charles. The winner of the showcase will be the subject of Charles' new film, as well as the star. The Bratz decide to enter the competition as their band (the Rock Angelz).

Following this, our protagonists begin to eat lunch in the cafeteria. After a few minutes, Anna - a dancer - enters, followed by the Tweevils. After expressing dismay at their arrival, the Bratz question the Tweevils about Ana. They claim that Ana is the best dancer at the camp and that she will win the showcase. Following this statement, Dylan develops an interest in Ana. The camp dance instructor, Madame Demidov, enters shortly after; claiming that Ana must go with her to practice.

After completing their lunch, the Bratz attend some camp activities: an acting class, a fashion course, a singing lesson, and a dancing class. Cloe excels in acting, Jade in fashion, Yasmin in singing, and Sasha in dance. Despite each girl's talent, the camp instructors behave harshly towards them. That night, when the girls return to their room, they complain about how hard the camp is. They resolve to only partake in the activities that they enjoy so that they can have more fun.

The next day, we follow Ana to one of her private lessons with Madame Demidov. Demidov is revealed to only care about herself, wanting to be the star of Charles' upcoming film; she believes that having Ana perform her choreography will help her reach this goal. Ana leaves this lesson rather upset, having worked so hard and not having much fun. On her way to the cafeteria for dinner, she is hit by a water balloon which was aimed at Dylan. She has an emotional breakdown, revealing that she is feeling overworked and underappreciated. Dylan invites Ana to the lake with him, encouraging her to have more fun in her life. Later that evening, the Bratz, Ana, Dylan, and Eitan partake in a bonfire. Eitan is sharing a ghost story when Madame Demidov approaches, terrifying the group.

The following day, as each girl is participating in their preferred activities, their instructors encourage them that they are each talented enough to win. Later on, the Bratz meet up and decide to not perform as a band in the showcase, but rather individually - Yasmin with a solo composition, Jade utilizing her sewing and design skills, Cloe performing a dramatic Shakespearean monologue and Sasha as a 'funky fresh dance star'.

After this meeting, Dylan, Ana and the Bratz plan to share a picnic. However, when they arrive, each of the Bratz reveals that they have forgotten to bring their planned food. They begin to argue, and each of the Bratz leaves. Ana and Dylan remain at the picnic, and roast marshmallows together. Ana and Dylan flirt for the rest of the evening, revealing their feelings to each other. The two sing a romantic duet, set to a montage of the couple, ending in a boat ride on the lake. The couple walks back to Ana's cabin, and after saying goodnight, Madame Demidov threatens Dylan until he agrees to separate from her.

The next day, Madame Demidov tells Ana that Dylan was just using her, to ensure Ana will continue to dance for her. Sasha has also begun to learn Demidov's choreography. Ana realizes that her dreams of being a dancer mean nothing to her if she has no one to share it with; prompting her to think about her friendships formed on this camp, particularly with Dylan. She asks herself if her 'dream is worth the price', and ultimately decides that it is not. As a result, Madame Demidov replaces Ana with Sasha for the showcase performance. Each of the Bratz evolves to become rather conceited on the day of the competition, each claiming that they are the only star. The group refuses to spend time together, for fear of revealing information to their competitors. Dylan and Sasha have a conversation, discovering that Ana had been unfairly stripped of her choreography. When they go to find her, the Tweevils arrive and tell the group that Ana has gone to the bus stop, intending to leave Camp Starshine, as 'everyone [had] turned their backs on [her]' (as Ana believes that Dylan has ditched her and that Sasha has stolen her routine). At the bus stop, Dylan reveals that Ana is the 'only girl [he's] ever loved', and the group stops Ana from leaving camp, explaining everything.

With five minutes until the final showcase, the Bratz (joined by Ana) form a new routine that they can perform together, to spite Madame Demidov and to show that friendship is the most important thing. This performance incorporates Jade's fashion skills, Cloe's dramatic flair, Yasmin's musical ability, and Sasha and Ana's dancing talent - all in a way that shows how important friendship truly is. The Bratz: Rock Angelz perform the song 'Friends are Everything', introduced by a dramatic reading from Cloe. The group wears clothes designed by Jade, and it is assumed that Yasmin has composed the song. Ana and Dylan share a minor dancing duet, in addition to each Bratz member having minor dancing parts, and Ana dancing during the entire performance.

The film closes with Dylan and the Bratz saying goodbye to Ana and the bus stop, inviting her to visit them in Stilesville. Cloe then asks someone for a 'line', and a man yells 'cut', revealing that the Bratz' last-minute performance won them the showcase. We are then returned to the red carpet, where Ana now joins the Bratz, and the film ends.

A video game adapation based on the film was released in 2008 for the Nintendo Wii, Playstation 2 and Nintendo DS. 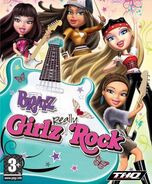 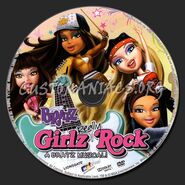 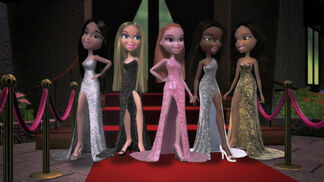 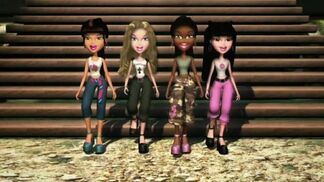 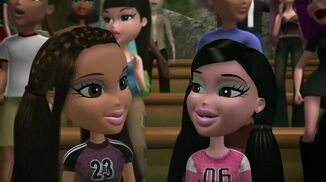 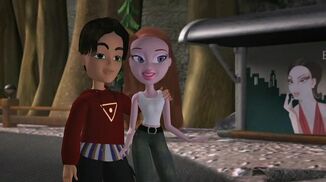 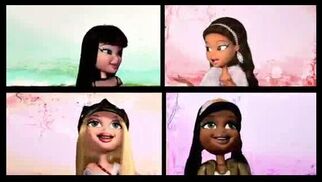 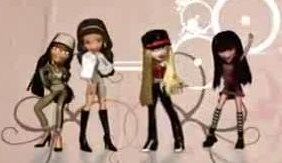 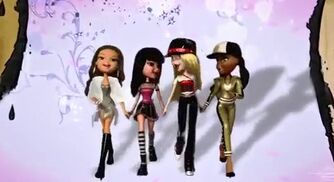 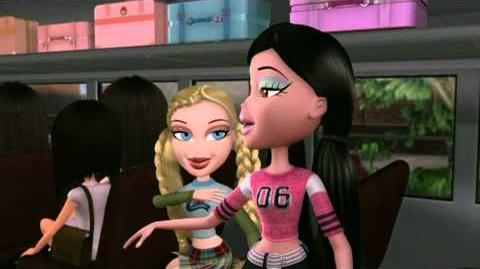