The Bratz girls race across America collecting teenage fashion designers to win a place in the America Rock's runway show.

Byron Powell, a reality TV producer travels from the UK to Stilesville to present the premiere of 'America Rocks'. Two rival fashion magazines Your Thing and Bratz Magazine will drive across America and visit three towns, with each team picking one competition winner per town. The girls well then go to New York and model their own fashion designs in the America Rocks Fashion Show. The winner wins a contract with fashion designer Mucci Ferrari and a pair of priceless diamond go-go boots.

The Bratz girls are excited to explore America, but Cloe is anxious about traveling through small towns and eating greasy food. They set off in their trucks across America. Whilst driving Cloe spots a hitchhiker and gets scared, but waves it off as nothing. They share the cookies Cloe brought and enjoy the drive, but when Cloe see's the hitchhiker again she freaks out leading her friends, Sasha, Jade and Yasmin, to think she is going crazy.

The Bratz stop at a giant blow-dryer attraction and watch it blow air. They're disappointed. Cloe leaves to go to the public bathroom but sees the hitchhiker waiting in front of the bathroom door and freaks out, running back to her friends for help. The girls follow her to confront the hitchhiker but find no one there. Believing the heat made Cloe hallucinate they return to the truck.

The girls stop at the Desert Oasis Motel for the night. Whilst the girls enjoy the hot tub, Cloe remains in the hotel room, upset her friends think she is crazy. When they return she goes to the hot tub to relax but finds the hitchhiker waiting for her and flees in the truck along with Jade, Yasmin and Sasha.

The Bratz arrive at their first town, 'Hockwater Springs' and meet up with Burdine and the film crew. Sasha presses a button on the truck's dashboard which unveils the truck to reveal a catwalk and video screens. When Burdine attempts to unfold her catwalk it malfunctions and crashes into the truck.

The Bratz announce they've picked Mandy Pickett as their winner from Hockwater Springs whereas Your Thing chooses Christy Baker, a clone of the Tweeviles. Kirstee and Kaycee immediately take a disliking to her.

Whilst the girls are driving they take a road detour and stop at the 'Side Explorer' café. Inside they find Burdine, the Tweeviles and Christy already sitting down. They are served by a waitress named Dot. She warns them not to pitch up hitchhikers wearing hats, further scaring Cloe. She tells Cloe a legend about a cowboy called Foul Mouth Foley who died after being shot in the jaw. Foul Mouth Foley is apparently stuck between life and death and hangs around trying to catch a ride to the land of the living.

Christy and Mandy go to the bathroom and the Tweeviles follow and make up a plan to get rid of Christy so Burdine will be forced to put them in the America Rocks runway show. Noticing that Mandy had been gone for a while, the girls go out to find her waiting outside. They go back inside the diner to find it closed and the mysterious hitchhiker Cloe had seen by the side of the road waiting inside. The girls scream and flee the diner in their truck.

Someone locks Christy in the outhouse with an axe. Dot lets her out and she flees and hides in the truck. Burdine returns to find her crying and tells her that the waitress tried to kill her with French fries. They drive away.

They girls apologise to Cloe for not believing her about the hitchhiker. Cloe wants to go home but after seeing Mandy upset about the competition ending early she agrees to stay and help Mandy to get to New York.

Burdine's truck gets a flat tire and she orders Christy to change it. Christy refuses and calls her father, Big Daddy, to pick her up, dropping out of the competition in the process.

The Bratz arrive at the second town, Mount Middleton where the Bratz pick out their next contestant, Tiffany. Your Thing fails to arrive at the town in time to pick up their second contestant. As the girls prepare to drive to the third town, Sasha can't find her keys and asks her friends to search their bags, only for Cloe to find her wallet missing, Yasmin has lost her money, camera and shampoo, Jade her wallet and her kiwi-lime hair conditioner and Mandy's wallet and hand lotion.

Byron spots TIffany's back leaking and asks her to open it. Inside Byron finds all the missing items. Believing her to be a pickpocket, Byron calls the police and has her arrested. Burdine arrives and accuses the Bratz girls of putting nails in her tire to burst it. As she is ranting a dark figure sneaks up behind the Your Thing truck and cuts the breaks.

Burdine drives ahead and gets Kaycee and Kirstee to change the direction of a sign post. Instead of taking a left to Greyton Place, the third town on the map, the girls go left to Old Planesville. Burdine swerves to avoid a cow in the road after her breaks fail.

The Bratz get lost and decided to park the truck and sleep for the night. They awake and decided to look around the cornfields for a farmer who may be able to help them. They hide after being scared by some scarecrows and are found and confronted by Sharidan, a young girl who lives nearby. Jade and Yasmin gush over the scarecrows clothing and Sharidan confesses she designed and made them all herself. The Bratz girls decided to choose Sharidan as their second contestant.

Sharidan invites the girls over to her home where they watch America Rocks and learns that Burdine and her crew have gone missing. Sharidan tells the girls to model her designs for her, believing she is too ugly to model them herself. The girls decide to give her a makeover to boost her confidence. She is happy until her parents see her and banish her to her bedroom. The Bratz confront Mr and Mrs Jones who are worried Sharidan will get hurt if she goes to New York.

Whilst they sleep, Sharidan works on her clothing line, creating a bunch of new clothing. In the morning the girls load Sharidan's clothes into the truck. After some thinking, Mr and Mrs Jones agree to let Sharidan go to New York City. When Mandy finds out she steals the Bratz truck containing all of Sharidan's designs.

Meanwhile the Your Thing truck is stuck in a muddy ditch surrounded by cows. As they wait for help, a UFO arrives and begins to abducting cows around them. Burdine and the Tweeviles flee the truck and run but are chased down by the UFO and abudcted.

The girls put the pieces together and realise Mandy framed Tiffany and put the nails in Burdine's tire. Mr Jones uses this as proof it would be dangerous for Sharidan to go to New York City. Mrs Jones gives Sharidan her car so she can go and chase her dreams the way she never got to.

On the way to New York, Cloe once again see's the hitchhiker and demands the Sharidan pull over the car. She decides to confront Foul Mouth Foley and chases him down, tackling him to the ground and pulling of his mask. Foul Mouth Foley is revealed to be Byron Powell. Byron tells the girls he tried to make the show more exciting. He was both Dot, the waitress at the diner and the hitchhiker. He also created the fake UFO Burdine saw and the cows being abducted.

Byron returns to New York City where he presents the finale of America Rocks fashion. Kirstee and Kaycee stand in for Your Thing, modelling for the crowd. Meanwhile Burdine tries to warn Byron about the aliens. When he confesses it was a prank created by him, Burdine takes this to mean Byron is the alien and runs out on stage to tell the audience. She is taken away by doctors to get help for her paranoia.

The Bratz arrive in New York City whilst Mucci Ferrari is showing off his fall fashion line. Mandy walks on stage wearing the clothing Sharidan designed. The girls confront Byron who tells them because Sharidan isn't from one of the official competition towns she can't be a contestant. Cloe reminds him that he broke the rules by including Foul Mouth Foley. He agrees to let Sharidan join the show and she gets to work designing some new clothes for herself and the Bratz.

Sharidan walks the catwalk. At first she is awkward and nervous but eventually opens up and receives a round of applause from the crowd. Votes flood in and Sharidan wins the competition. However Mandy refuses to accept the loss and steals the Diamond Go-Go Boots from Byron after show. The Bratz girls chase her into the subway system where she tricks them onto getting on a train. Sharidan appears and Mandy tries to flee by running on the subway tracks. A train comes and Mandy becomes stuck when her boot becomes lodged under the railway track. Sharidan helps her get free but once on the platform Mandy pushes her away and attempts to flee again. She is stopped by the Bratz girls and Byron who calls the police and has Mandy arrested.

Mucci Ferrari asks the girls to model his winter line and they agree. They go to an ice rink where they model his clothing and take pictures. America Rocks is reviewed for a season 2, Sharidan goes home to her parents with her go-go boots and a fashion design contract and the Bratz girls celebrate by going shopping. 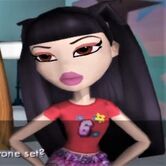 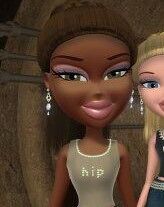 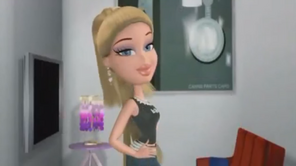 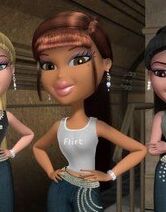 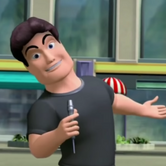 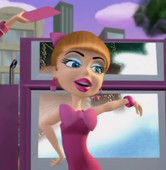 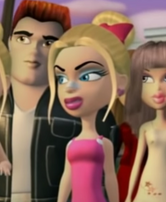 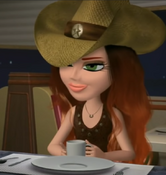 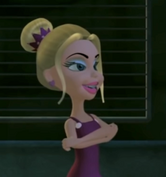 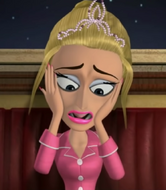 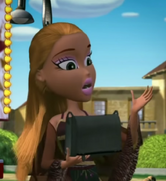 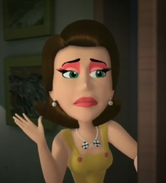 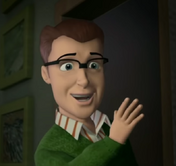 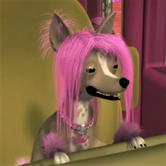 An adventure video game based on the movie was released in 2006 by Blitz Games and published by THQ for the Gameboy Advance, Gamecube, Playstation 2 and Nintendo DS.

A line of Forever Diamondz Bratz dolls was released in 2006. The line included playsets, dolls and fashion makeover heads. 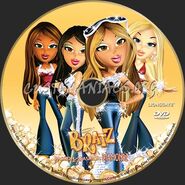 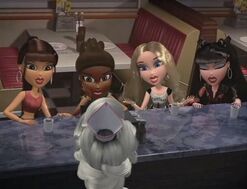 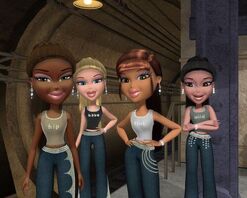 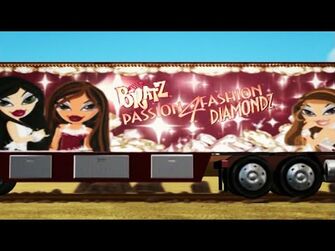