Bratz: Ponyz 2 is a 2008 Simulation Game developed by Neko Entertainment. It is a direct sequel to the 2007 game Bratz: Ponyz and the ninth video game released based on the Bratz dolls line.

"The Bratz Ponyz adventure continues! Meet four all-new Ponyz - then play all new mini-games and activities. Primp and party as you do their hair and makeup, create cool accessories like jewellery and stickers, help them dance and more. You can even take fashion photos of the Ponyz to trade with your friends using DS Wireless Communications. Join the fun in the world of Bratz Ponyz!"

"Designed for girls ages four and older, Bratz Ponyz 2 for the DS allows players to develop their passion for fashion by participating in the Bratz Ponyz Town beauty pageant. Players can choose from four different Bratz Ponyz, which they can dress-up with accessories collected throughout the game's fashion, beauty, music, dancing, and arts and crafts-themed adventures. Players can also guide their Bratz Ponyz through the tropical islands to meet and befriend other Bratz Ponyz characters, exchange pictures, race their friends and compete in a drawing contest using the platform’s wireless connection." 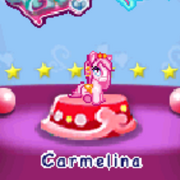 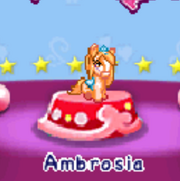 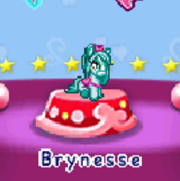 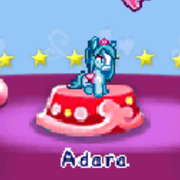 Carmelia is a pink pony with blue and pink hair.

Adara is a white horse with red and pink hair.

Ambrosia is an white pony with orange hair. She is featured on the cover of the game.

Brynesses is a white horse with green and blue hair.

A white pony with pink hair and white highlights. She is based on Cloe.

A brown pony with brown hair and blue higihlights. She is based on Jade.

A brown pony with warm brown hair and blonde highlights. She is based on Yasmin.

A black pony with black hair and white highlights. She is based on Sasha. 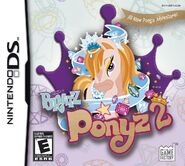 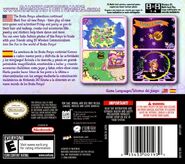