Bratz Super Babyz is a video game based on the movie of the same name.

"Aliens have landed on earth and one of their devices, the 'Matter Exchanger," has fallen into the wrong hands and transformed the babyz into Super Babyz! With their newfound super powers, the Babyz use their abilities to battle the evil invading aliens. Join the super baby for a jam-packed stylin' adventure that is out of this world!"

"Aliens have landed on Earth at the Stylesville Adventure Planet. One of their alien devices, the Matter Exchanger, fell into the wrong hands and transformed the Babyz into superheroes! With their newfound Super Powers, the Babyz use their abilities to help the citizens of Stylesville and battle the evil invading aliens." 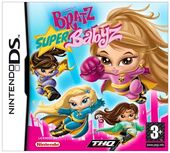 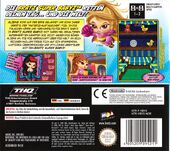 The game received negative reviews. IGN gave the game a 4.0/10 calling it "unengaging...shallow and dull". Common Sense Media felt the title gave misleading messages on how young girls should look. Gamezone thought the gameplay was simple enough and wouldn't frustrate the player. Worth Playing thought it didn't hold up as a worthwhile licensed game. While Game Vortex did their Bratz reviews from the point of view of the target player, the reviewer still felt it was an "Insult to intelligence". JeuxVideo felt the player needed to have an understanding of the film it was based on to understand the plot.