Bratzillaz (also known as House of Witchez) is a sub-brand of Bratz created by MGA entertainment. It debuted in 2012 with the 1st edition of the Bratzillaz line and concluded in 2013 with the Witchy Princesses line.

Each doll (with the exception of the Core (Basic Line) dolls) has glass eyes with an articulated, posable body. The dolls come with a broom hair brush, and some come with a spell scroll and a doll stand. Some have a unique pet, sold separately, and most have a personal witch mark symbol. Character cards come with the first edition dolls. They reveal augmented reality content when held up to a webcam: virtual doll animation and character video. The Core (Basic Line) dolls are part of an inexpensive budget line and have a non-articulated body and painted eyes as opposed to the usual glass eyes.

The official Bratzillaz website launched in July 2012. The website included character bios, parallax scrolling, and games. In a first for MGA Entertainment, Bratzillaz games are available on apps for smartphones. It was closed on 2016.

On July 13, 2012, the official theme song for the dolls was revealed in a live-action music video, which was shot at the Canfield-Moreno Estate. In August, MGA released the first Bratzillaz webisode to the official website and YouTube. A second webisode was released weeks later on September 11, 2012. The first season aired until January 4, 2013. A second season was expected to be released due to a leaked unreleased webisode titled "Fashion Bites" and parts of it being featured at the end of "Midnight Beach" when Yasmina looks into the future. However, due to MGA taking a hiatus with the Bratz in 2014 to rebuild the brand, production of the dolls ended and a second season was never completed. 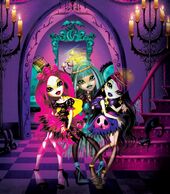 Back to Magic Commercial