Levitor is very warm, gentle and kind. He loves helping others and doing what is right.

Levitor has the magical ability of telekinesis, moving objects with his mind.

Levitor is good friends with Cloetta, Jade, Sashabella, Meygana, Vampelina and Fianna. He seems to be a favourite of Mr. Lectric because of his abilities to understand French.

Levitor seems to have somewhat of a crush on Yasmina. He asks to interview her for the school newspaper and is often found staring and smiling at her. Out of all of his friends, he seems to like her the most and can often be seen standing/sitting with her in group settings. They often spend time alone together, although they are not officially dating.

In September 2013 Illiana used her powers to make Levitor admit he liked Yasmina. [1] In October 2013 the he brought her a pumpkin for Halloween and the two held hands. [2]

In a deleted scene in the Glam Gets Wicked (Tonight) music video, Levitor and Sashabella share a kiss.[3] 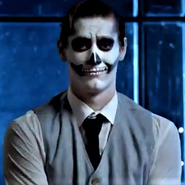 Levitor in Glam Gets Wicked (Tonight)