Meredith Baxter-Dimly is a character appears in Bratz: The Movie. She is portrayed by Chelsea Kane.

Meredith is the daughter of Principal Dimly, and student body president of Carry Nation High School.

Meredith has light-tone skin and buttery-blonde hair. She usually wears casual but trendy clothes. She does not appear at all in the Bratz cartoon shows/movies or the video games.

As the typical queen bee, she is a narcissistic girl who thinks that she's superior to everyone. Also, she is mean, rude and vile; not tolerating that someone is better than her and doing mean things for getting whatever she wants. When the Bratz came to school, she sees them as a threat for her kingdom, and tries to destroy them.

Meredith is the daughter of Barbara and Principal Dimly and the sister of Cherish.

Meredith is good friends with Quinn and Avery.

Meredith is in love with Cameron as well as Cloe, making Meredith angry because Cameron actually likes Cloe. This creates a love triangle; Meredith-Cameron-Cloe. When Cameron says, "Who is that?" Meredith says, "No one you need to think about, Cameron" meaning she is annoyed. Then, when, Cameron cheers for Cloe's goal, Meredith says "What are you gawking at?" and Cameron says, "She's hot!" and, Meredith looks angry. 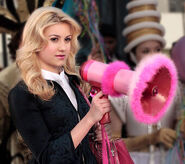