Nita is a character that was introduced as a doll in the The Movie Twiins collection and on-screen in Bratz Babyz: The Movie.

Nita wears pink eyeshadow, red lipstick, and she enjoys painting her nails and toes red to.

Nita is the feisty twin, always calling her sister names such as dopey or Nora Snore-A though after some troubles when she loses her dog, she and her sister grow to love each other and appreciate their differences. 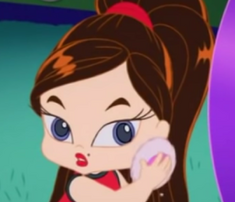