Sorrel, known as Urban Cutie by her friends, is a Bratz character that makes one appearance in the 6th edition of the Twiins line

Sorrel is called Urban Cutie by her friends for her huge city style! Whether she’s checking out the hottest shops or playing with her stuffed animal dinosaur, she always looks great!

Sorrel has a twin-sister named Keelin. 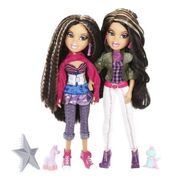