Zell is a character that appears in Bratz: Genie Magic. She is voiced by Cree Summer.

Sometime when Katia was very young Zell and Kon met and formed the Evil Scientists Association (ESA) together. They convinced Sebastian to join them team under the guise of being the Environmental Safety Association. When Sebastian's lamp broke, Kon turned his intentions towards his daughter Katia. Whilst Kon was quick to use his wishes, Zell kept her one wish to herself, wanting to save it for somethign special.

When Katia escaped the ESA headquarters, Kon tasked Zell with bringing her back. She sent ESA agents out to find her, but eventually Katia returns of her own accord, worried about her father. Kon uses Katia's magic to punish foreign government with storms when they refuse to meet his financial demands. When France refuses to comply, Kon tells Zell to wish for lightning storms above France. She doesn't want to waste her wish, but he shouts at her until she agrees.

After Sebastian shouts at Katia, Zell comforts her. Katia confesses her desire to be normal, but Zell tells her she is special. She wishes for France to have ongoing electrical storms and Katia has no choice but to grant her wish.

When Zell finds security footage of Katia hanging out with human girls, Kon is furious and tells her to hunt down and kill the girls. When Katia overhears Kon's demands she escapes to save her friends, however Zell sends out ESA agents who get them first. They bring in Cloe and Yasmin. Zell gives the girls truth serum and interrogates them to find out what they know.

Zell places a trap in Sebastian's study that will freeze the room and all inside the next time the door closes. The Bratz arrive and manage to save Sebastian, so Zell takes the suitcase full of money, betrays Kon and flees the building in a helicopter. A chase insures, and Zell looses the suitcase to Katia.

It is later revealed that Zell's helicopter crashed and although she survived, she managed to avoid arrest.

Zell is closed off and shy, often stuttering and avoiding eye contract with others. She is used to being bossed around by Kon. However she's not innocent, having no problem with calling Katia a brat, trying to kill Sebastian and wiping Cloe and Yasmin's memories.

Although it's never outrighted confirmed in the film, it's hinted at that she and Kon have a romantic relationship. Kon often lashes out at her, steals her ideas, shouts at her and forces her to do things she doesn't want to do, yet she refuses to leave him. At some point Zell became sick of Kon's abuse and decided to take the money they'd stolen for herself.

Katia seems to have a nice friendship with Zell in a way she doesn't with Kon. She trusts Zell and leans into her touch. It is very easy for Zell to manipulate Katia as she is so trusting. 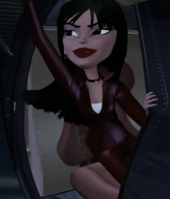